8mm and Super8 movie film, unless stored in very hot or moist conditions or in tightly sealed cans, is nearly always in good enough shape to do a film transfer. Although the plastic leader sometimes becomes brittle over time, in most cases the filmstock itself remains in good shape. 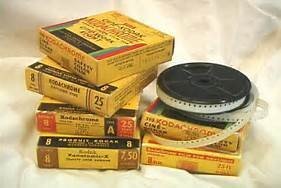 There are a few things to look for if you have doubts. First, smell your film. If it has a very strong chemical odor, chances are it has damage of some sort. Check to see if the layers are stuck together. If not, check to see if the film has started to curl if you look at it edge-on. Finally bend the film and see if it is brittle. If your film is stuck together, badly curled or very brittle, we may not be able to transfer it. For film that is slightly curled or damaged which we may be able to transfer, you will probably see defects in the transfer including edges that are out of focus, skips and pauses in the film, framing issues, etc.

About the only other thing that can ruin your film is water. If the film is stored in wet conditions, or if it is submerged, the emulsion layer will run and your images will be turned into red and blue blobs. Again, there is not much we can do in this case.

The good news is that far less than 1% of all the film we see is damaged so badly we can’t do a transfer. We occasionally transfer film dating back to the early 1940’s, and occasionally from the 1930’s and even the late 1920’s, and it is generally in good condition.

Of course, there are small problems that affect the look of your 8mm or Super8 film, but won’t stop us from doing a transfer. These may include slight fading, debris that is part of the film image, burns from prior play, poor framing due to using a movie camera without a “through the lens” viewfinder, snagged or ripped sprocket holes, crystals that are part of the image, and many other little problems that annoy us, but you probably won’t notice or care about.

We digitize your 8mm & Super 8 Film Reels to DVD or MP4 files on USB thumb drive to be enjoyed for generations.

The process takes lots of time to capture your 8mm Home Movies frame-by-frame, creating thousands and thousands of individual images that are combined into a movie. This process results in 1080p clarity, detail, and colour from your old films.

For more information on our 8mm transfer service, see our Services page.

This is the Primary Sidebar Widget Area if you are using a two or three column site layout option.

You can add content to this area by visiting your Widgets Panel and adding new widgets to this area.